Recently, while zipping west on I-70, I detoured south on U.S. 68 and dropped in on my alma mater, Antioch College, for the first time in more decades than I care to say.

It got me to thinking, as these things will, about life-changing decisions, how we make them and even where we make them. (It’s not like there’s one place that everyone goes, sits down and says, Let’s change the life a bit.) 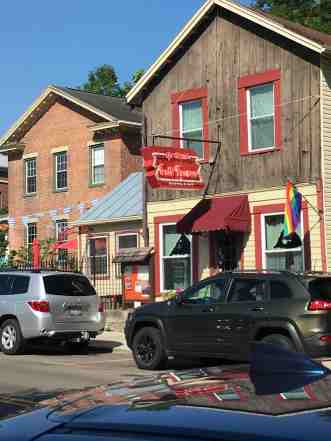 As I strolled through beautiful downtown Yellow Springs, Ohio (pop. 3,487), I spied Ye Olde Trail Tavern, a place I might have frequented with my favorite professor in my misspent youth. (Any youth that is not misspent is wasted.)

What a change from the last time I saw it, back in the early 1980s. It had a neon sign!

I explained it this way on page 38 of my memoir, HOTEL CONSTELLATION: Notes from America’s Secret War in Laos:

When I started talking about dropping out because the education I chose was not matching the financial sacrifices my family and I were making, Dan came up with a truly radical idea: I should go to Viet Nam to study for a year under the Antioch Education Abroad (AEA) program.

I don’t remember exactly when he presented it as an option. Well, you could do another co-op term, or you could go to Viet Nam, he probably said. Hey, there’s an idea, Dan. I think I’ll go to Viet Nam. I hear it’s quite the spot.

We might have been sitting in a booth at the Olde Trail Tavern, a dive on the main drag through Yellow Springs. Dan and I downed a few pitchers of beer there, he holding court for me, the avid acolyte.

AEA sent a lot of kids to foreign countries, mostly in Europe, a few to South America, and even fewer to places like Kenya, Nigeria, and India. Going to Viet Nam was an intriguing idea, straight out of the “put up or shut up” school of decision making. We noodled over what it would take and how it would work. Paula Spier, a middle-aged, motherly member of the AEA staff, bought into it.

And in August 1970, I flew off for two of the most intriguing years of my life.

It might even explain how I came to write my new book, The Mark of the Spider, but probably not.