Skip to primary content
All those memories. Those photos. Those notes and boxes of stuff.
How do you turn those into a memoir?
Let’s be honest. It too early – wa-a-ay too early to think of outlining chapters.
So start with the action. Outline the action in your life.
I owe everything I know about action outlines to my high school friend, Erich Hoyt, who has written dozens of authoritative science books about killer whales and creatures of the deep. I think he also did one on ants. (He’s a smart, curious guy adept at whatever he turns his big brain to.)
When I was first trying to pull my HIDDEN WAR: A Memoir of America’s Secret Crusade in Laos together – oh back in 1995 or so – I asked Erich how to arrange all this information I had compiled. (For those who have forgotten or missed earlier blog posts, I have seven — count ‘em, seven — file boxes full of journals, clippings, photos, papers, books and assorted other documents left over from a two-year adventure in Southeast Asia.) 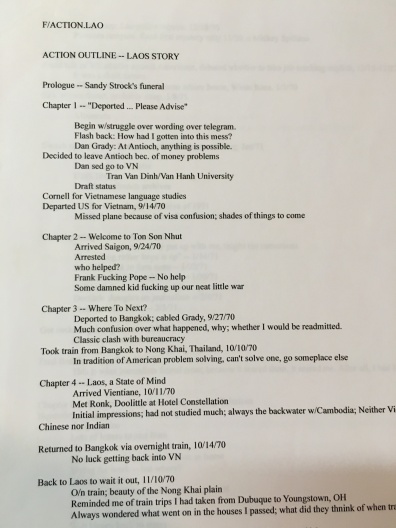 Page one of a very early draft of the action outline for HIDDEN WAR.

Erich advised me to outline the entire story based on actions I had taken or experienced. You can do a lot in two years, but when you start noting your actions — got a haircut on a street corner with a dozen Lao children staring at me — you realize quickly that some incidents are more important than others.
For instance, the haircut did not make the final cut. (OMG, that’s punishment.) But the scene where a soldier dies at my feet in a helicopter, that action rated a chapter of its own.
And here’s where those lists and your master monster chronology really pay off.
Print those files and  run through them with a highlighter in hand. No action, no highlight. Big action, highlight. (You can add the big introspective periods later, preferably tied to an … action.)
You hang all the flesh and guts of your memoir onto the action outline. This is also your story arc. It starts, and it goes along building to a climax (more later, but any kind of climax) and then it ends and you wrap it up.
If you’re not seeing the story build in the outline, maybe something is wrong with a) the outline or b) the story.
The action outline will force you to focus on the parts of your story. Does chapter one really grab the reader? What about it, i.e., what action does the grabbing? In my case, I was arrested immediately upon arrival in Saigon.
What does the climax look like? My friend’s infant daughter died, and I inherited his job as a result. (Let’s talk about the horrible unfairness of life. I got something I wanted and felt like a total shit about it.)
How are you going to end it? Did you win? Lose? Draw? My world just sort of disintegrated with the war, and I slunk out of town. Sometimes that’s the best you can do. (Slinking was one of the items in my action outline.)
In writing fiction, I fly by the seat of my pants, allowing characters to determine where the action flows. With non-fiction, I think you need a plan. I certainly did. The action outline amounted to the first draft of the plan. (Not the first draft of the memoir.)

1 thought on “Memoir Writing: No. 5 Outline the Action”